The Electoral College is due to meet on December 14.

U.S. President Donald Trump said on Thursday he will leave the White House if the Electoral College votes for Democratic President-elect Joe Biden.

In the nearest he has come to a concession, Republican Trump said if Mr. Biden is certified the election winner by the Electoral College he will depart the White House. Biden is due to be inaugurated on Jan. 20.

The Electoral College is due to meet on December 14.

Mr. Trump made the comments at the White House after speaking to U.S. troops during the traditional Thanksgiving Day address to U.S. servicemembers.

Mr. Biden won the November 3 presidential election with 306 Electoral College votes — many more than the 270 required – to Trump’s 232. Biden also leads Trump by more than 6 million in the popular vote tally.

Mr. Trump has so far refused to concede the election and continues to claim without evidence that the election was marred by widespread fraud, and that he and not Biden won it.

Mr. Trump said that delivery of the coronavirus vaccine would begin next week and the week after.

Speaking to U.S. troops overseas via video link to mark the Thanksgiving holiday, Mr. Trump said the vaccine would initially be send to front-line workers, medical personnel and senior citizens. 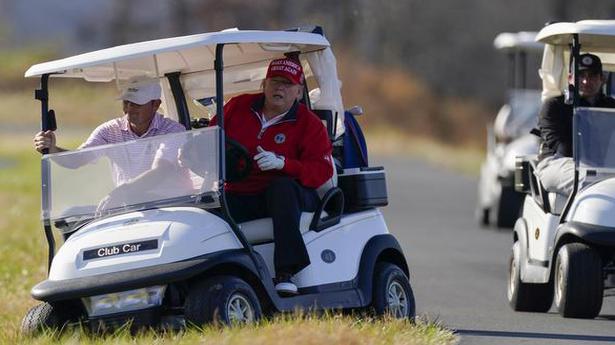