President Donald Trump on Wednesday pardoned his former national security adviser Michael Flynn, who had twice pleaded guilty to lying to the FBI during the investigation into Russian meddling in the 2016 presidential election.

Trump’s pardon, which could be the first of several after he lost the 2020 presidential election to Democrat Joe Biden, drew condemnation from Democrats and other critics.

A retired Army general, Flynn pleaded guilty to lying to the FBI about interactions he had with Russias ambassador to the United States in the weeks leading up to Trump’s inauguration in January 2017.

He has since sought to withdraw the plea, arguing that prosecutors violated his rights and duped him into a plea agreement. His sentencing has been deferred several times.

“It is my Great Honor to announce that General Michael T. Flynn has been granted a Full Pardon. Congratulations to @GenFlynn and his wonderful family, I know you will now have a truly fantastic Thanksgiving!” Trump wrote on Twitter, a day before the U.S. Thanksgiving holiday.

Flynn’s attorney, Sidney Powell, who told a court in September she personally asked Trump not to pardon her client, said the pardon was “bittersweet” because Flynn was innocent

Trump’s move was the highest-profile pardon he has granted since he took office. Among others, the Republican president has pardoned Army personnel accused of war crimes in Afghanistan and Joe Arpaio, a former Arizona sheriff and hardliner against illegal immigration.

House Speaker Nancy Pelosi called it “an act of grave corruon and a brazen abuse of power.”

Flynn served as Trump’s first national security adviser but the president fired him after only 24 days for lying to Vice President Mike Pence as controversy broke over the former general’s contacts with then-Russian Ambassador Sergei Kislyak.

Flynn was one of several former Trump aides to plead guilty or be convicted at trial in former Special Counsel Robert Muellers investigation into Moscows interference in the 2016 U.S. election to boost Trumps candidacy. Russia denied meddling.

In May, Attorney General William Barr stunned many in the legal community by ordering prosecutors to have the case dropped, a decision that came after Trump repeatedly complained that Flynn was being treated unfairly.

Flynn and the Trump administration said U.S. District Judge Emmet Sullivan, who presided over the case, was required by law to grant the request for dismissal. An appeals court in August denied Flynn’s request to order Sullivan to end the case.

“The President has pardoned General Flynn because he should never have been prosecuted,” the White House said in a statement. “In fact, the Department of Justice has firmly concluded that the charges against General Flynn should be dropped. This Full Pardon achieves that objective, finally bringing to an end the relentless, partisan pursuit of an innocent man.”

The president has spent the days since the November 3 election seeking to overturn the results and refusing to concede to Biden. On Monday, he allowed his administration to take part in a transition to a Biden White House, but he has continued to challenge the election’s legitimacy. With less than two months before Inauguration Day, he could focus his remaining time in office on more pardons and other moves to burnish his legacy.

Two former White House officials said more pardons were likely. “”This is one unfettered presidential power the president enjoys using,” one of them said.

Trump said in March he was strongly considering a full pardon for Flynn. He said the FBI and Justice Department had ”destroyed” Flynn’s life and that of his family, and cited an unspecified, unsubstantiated report that they had lost records related to Flynn.

Flynn was supposed to help cooperate with the government as part of his plea deal. But he later switched lawyers and tactics, arguing that prosecutors in the case had tricked him into lying about his December 2016 conversations with Kislyak.

The Justice Department has repeatedly denied allegations of prosecutorial misconduct, and Sullivan rejected all of Flynns claims in December 2019.

Federal prosecutors had asked the judge in January to sentence Flynn to up to six months in prison, arguing in a court filing that “the defendant has not learned his lesson. He has behaved as though the law does not apply to him, and as if there are no consequences for his actions.”

Flynn also served as head of the Pentagon’s Defense Intelligence Agency but was forced out in 2014 in part due to his management style and opinions on how to fight Islamist militancy.

He joined the Trump 2016 election campaign and at the Republican National Convention that year led supporters in chants of “Lock her up,” in reference to Democratic nominee Hillary Clinton.

Other former Trump aides were convicted of federal crimes following the Russia inquiry. Trump’s longtime friend and adviser Roger Stone was sentenced on February 20 to three years and four months in prison for obstruction of justice, witness tampering and lying to lawmakers investigating the Russian election interference. Trump commuted his sentence.

Paul Manafort, Trump’s former campaign chairman, was sentenced last year to 3-1/2 years in prison after being convicted of unlawful lobbying and witness tampering, which combined with a sentence in a related case equaled a term of more than seven years behind bars. Manafort was released from prison in May and is serving the rest of his sentence at home. 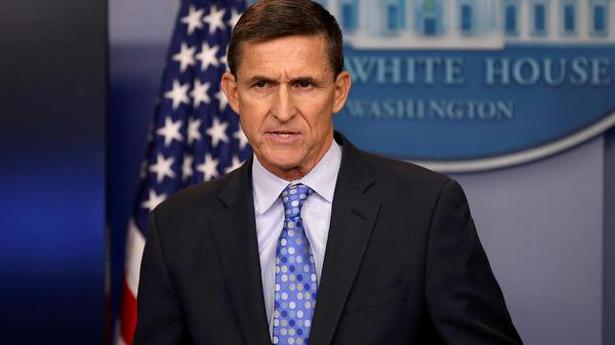