A rushed cull of Denmark’s minks over concerns about a coronavirus mutation has left the country facing a new horror, as cadavers of the animals re-emerge from the earth.

The macabre phenomenon was observed in a military training field outside the western town of Holstebro, where thousands of minks had been put into an improvised mass grave.

The carcasses rose to the surface, lifted by pressure from gases released by the decomposition, according to local police.

The environment ministry said minks should be covered by at least 150 centimetres (five feet of earth, but according to public broadcaster DR, they were only buried under 100 centimetres of dirt in the field outside Holstebro.

And now, for the latest in the saga of Denmark’s Covid-infested mink: Although buried 3 feet underground, the mink are bloated with gasses and thousands are rising to the surface -- from mass graves. I swear they’ll be making zombie movies about this soon.https://t.co/5V9q1A6j4I

“The authorities are playing with our environment and using it as a dumping ground,” Leif Brogger, a local politician, told Jyllands-Posten newspaper.

Adding to the frustration, the animals had been buried too close to a lake, raising fears of phosphorus and nitrogen pollution, though officials have promised to fix the situation.

The ministry insisted the minks’ escape from their tomb was a “temporary problem tied to the animals’ decaying process”.

“To avoid potential problems for animals and humans the area will be monitored 24 hours a day until a fence is put up,” said the ministry.

Photos and videos of the ghastly sight have set social media abuzz, with one Twitter user dubbing 2020 “the year of the zombie mutant killer minks”.

In early November, Denmark — which is the world’s largest exporter of mink fur — announced it would cull all of the country’s more than 15 million minks after a mutated version of the novel coronavirus was discovered and believed to jeopardise the effectiveness of future vaccines.

Two weeks after having issued the decree — while in the middle of political crisis over the legality of the decision — the government concluded last week that the potential threat to human vaccines was “very likely extinguished”, in the absence of any new cases of the mutated version.

More than 10 million minks have already been culled in the Scandinavian country, according to the latest tally.

What we know about the mink coronavirus strain 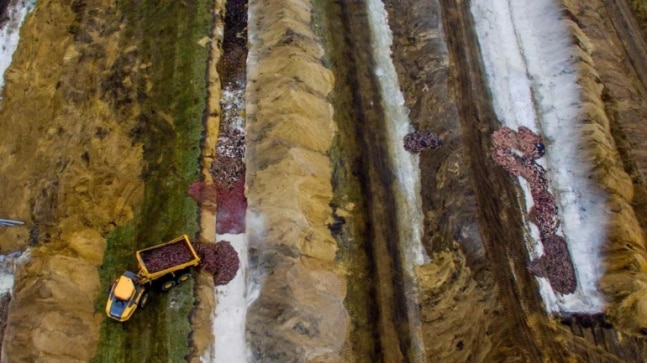