As US President Donald Trump refuses to accept the results of the US election and concede to President-elect Joe Biden, the latter has said “more people may die” if he continues to resist power transition and cooperation in dealing with the coronavirus pandemic.

Joe Biden has urged the US Congress to pass a new relief legislation and said businesses and labour leaders want to work together to uplift the economy after being ravaged by the Covid-19 pandemic.

However, Joe Biden also added, “We’re going into a very dark winter. Things are going to get much tougher before they get easier.”

Joe Biden will inherit an economy that has suffered millions of job losses during the Covid-19 pandemic that has killed more than 2,46,000 people in the United States already even as daily coronavirus cases continue to surge. Joe Biden prepares to take office on January 20.

I won the Election!

Biden has again called upon the Trump administration to cooperate with his transition team on containing the surge in Covid-19 cases. “More people may die if we don’t coordinate,” Biden said.

He urged the Congress to pass pandemic relief legislation. Talks on such legislation stalled for months before the November 3 election.

Biden insisted, however, that Trump’s refusal to concede was not inhibiting his transition efforts. “I find this more embarrassing for the country than debilitating for my ability to get started,” Joe Biden said.

Meanwhile, Donald Trump continues to tweet about winning the US election.

After the Moderna vaccine announcement, Trump also said, “Another vaccine just announced. This time by Moderna, 95% effective. For those great “historians”, please remember that these great discoveries, which will end the China Plague, all took place on my!”

Biden beat Trump by the same 306-232 margin in the state-by-state Electoral College that prompted Trump to proclaim a “landslide” victory in 2016. Biden also won the national popular vote by at least 5.5 million votes, or 3.6 percentage points, with some ballots still being counted. 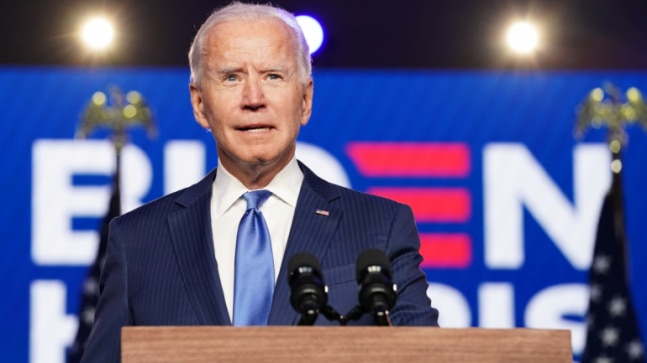