Two people have been killed in Vienna after multiple gunmen opened fire in the central part of the city on Monday (local time. Police later gunned down one of the attackers while another is still on the run.

The gunmen attacked six locations and all were near the street housing around the central synagogue in Vienna.

Chancellor Sebastian Kurz described the attack as a “repulsive terrorist attack”. The attack in Vienna comes days after the second terror attack in France in recent times in which a woman was beheaded inside a church and two others were also killed.

Austria Interior Minister Karl Nehammer warned people to stay away from the city centre, adding that border checks were being reinforced and that children would not be required to attend school on Tuesday.

I’m following with grave concern the violent attacks of terror in Vienna, one of our UN HQ.

I condemn these attacks in the strongest possible terms and reaffirm the @UN’s solidarity with the people & Government of Austria. https://t.co/WQfbKhsMg6

“We have brought several special forces units together that are now searching for the presumed terrorists. I am therefore not limiting it to an area of Vienna, because these are mobile perpetrators,” Nehammer earlier told broadcaster ORF.

The minister further said that the attackers “were very well equipped with automatic weapons” and had “prepared professionally”. Vienna mayor Michael Ludwig told ORF that 15 people were being treated in Vienna hospitals, and that seven were in a serious condition.

Jewish community leader Oskar Deutsch said on Twitter it was not clear whether the Vienna synagogue and adjoining offices had been the target and said they were closed at the time.

The attack happened hours before a partial lockdown was due to go into place due to the rising spread of the coronavirus, with restaurants, cafes and hotels shuttered and restrictions on movement at night.

Authorities gave no indication of the identity of the assailants or reason for the attack.

“We really can’t say anything about the background yet,” Kurz told ORF. “Of course an anti-Semitic background cannot be ruled out.”

President Emmanuel Macron of France, which has seen two deadly knife attacks in Paris and Nice in recent weeks, issued a statement expressing shock and sorrow. 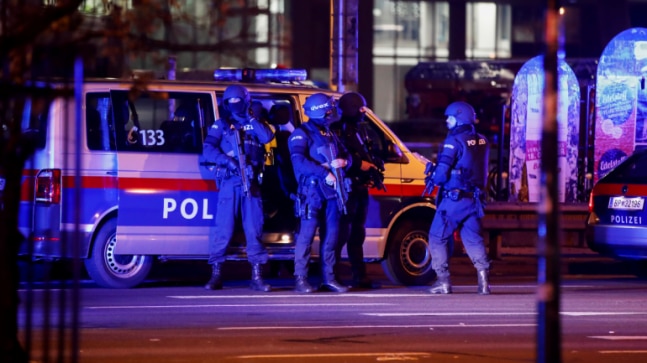 « US election scenarios: Even if Biden wins, here’s how Trump could still be president » Covid-19 vaccine update: From CureVac candidate’s immune response in humans to unwilling Russians