Addressing a rally in Rochster in Minnesota on Friday, Donald Trump, 74, said Joe Biden has obsession for power

U.S. President Donald Trump has accused his rival and Democratic presidential candidate Joe Biden of being a corrupt career politician who has done nothing but betrayed the Americans for the last 47 years.

Addressing a rally in Rochster in Minnesota on Friday, Mr. Trump, 74, said Mr. Biden has obsession for power.

“Biden is a grimy, sleazy and corrupt career politician who has done nothing but betrayed you for 47 long years. He will look you in the eyes, and then turn right around and stab you in the back. The only thing he cares about is political power,” Mr. Trump said.

A Democratic stronghold, Mr. Trump is seeking to wrest Minnesota for the Republicans for decades. He is currently trailing behind Mr. Biden with five percentage points.

Making a strong case for his re-election, Mr. Trump told his supporters that giving him a decisive victory on November 3 is the only way to defend their dignity.

“On November 3, vote to defeat Biden and Save American Freedom,” Mr. Trump said, alleging that his opponent will continue his 47 years of cruelly betraying African-Americans.

Mr. Biden called them super-predators, ripped apart their communities, and did everything in his power to wipe out the African-American middle class, said the President.

Noting that Mr. Biden’s plan will delay the COVID-19 vaccine, postpone therapies, crash the economy, and shut down the entire country, Mr. Trump asserted that under his plan, the administration will deliver a safe vaccine to the American People in just a few short weeks.

“We will wipe out the China Plague once and for all! A vote for Republicans is a vote for the American Dream, and the party of Abraham Lincoln!” he said.

The U.S. is the worst-affected nation by the coronavirus, with the total number of infections and deaths standing at 90,34,925 and 2,29,544 respectively, according to Johns Hopkins University.

“Over the next four years, we will make America into the Manufacturing Superpower of the World, and we will end our reliance on China once and for all,” he said.

On Friday, Mr. Trump addressed as many as four rallies as he intensified his attack against Mr. Biden.

“Biden will deliver poverty, misery, depression. I will deliver jobs, jobs, jobs, and the greatest economy in the history of our country. That’s going to be next year. You’ll see it,” Mr. Trump said at another election rally in Green Bay, Wisconsin.

“Biden was a cheerleader for North American Free Trade Agreement, which is the worst trade deal ever made, and China’s entry into the World Trade Organisation, which cost Wisconsin manufacturing jobs. At every turn, Biden betrayed American workers and twisted his knife into the back of Wisconsin workers. You were–you suffered as much is anybody,” he alleged.

Mr. Trump alleged that Mr. Biden has also spent half a century betraying the African-Americans.

“He devastated black families with the 1994 crime bill, and he called black youth ‘super predators’, a term that’s a terrible term. Super predators over and over again. And then he wonders why they’re not doing well with the black vote. You know, the black vote’s not turning up. See, now we don’t have to go by the fake polls. Now you see what’s happening,” he said. 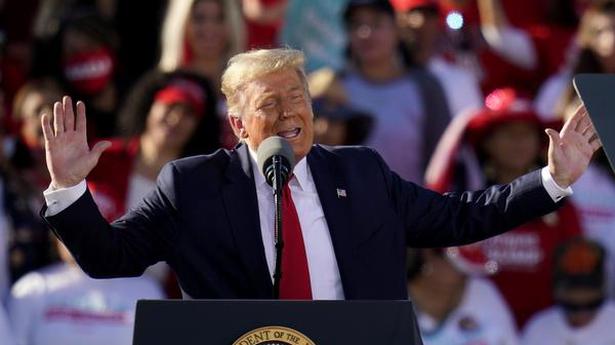