A French minister has sought the suspension of former Malaysian Prime Minister Mahathir Mohamad’s Twitter account for saying “Muslims have a right to be angry and to kill millions of French people for the massacres of the past”.

Mohamad’s comment came soon after three people were killed in a knife attack in the French city of Nice.

Cedric O, Secretary of State for Digital Sector of France, has demanded immediate suspension of former Malaysian PM Mahathir Mohamad’s Twitter account. He went on to say that Twitter would be an accomplice to a “call for murder” if Mohamad’s account is not suspended.

I just spoke with the MD of @TwitterFrance. The account of @chedetofficial must be immediately suspended. If not, @twitter would be an accomplice to a formal call for murder.

“I just spoke with the Managing Director of Twitter France. The account of former Malaysian PM Mahathir Mohamad must be immediately suspended. If not, Twitter would be an accomplice to a formal call for murder,” said Cedric O.

On Thursday, Mahathir Mohamad hit out at French President Emmanuel Macron and called him “very primitive in blaming the religion of Islam and Muslims for the killing of the insulting school teacher”.

“It is not in keeping with the teachings of Islam. But irrespective of the religion professed, angry people kill. The French in the course of their history has killed millions of people. Many were Muslims,” Mohamad added.

Mohamad also said Muslims “have a right” to be angry and “kill millions of French people for the massacres of the past”.

While Mohamad clarified that he does not approve of the killings after yesterday’s attack in France, he mentioned clearly that freedom of expression does not “include insulting others”.

“Muslims have a right to be angry and to kill millions of French people for the massacres of the past. But by and large the Muslims have not applied the ‘eye for an eye’ law. Muslims don’t. The French shouldn’t. Instead, the French should teach their people to respect other people’s feelings,” the former Malaysian prime minister said.

Before his tweet was deleted by Twitter for glorifying violence, Mohamad faced severe backlash and criticism on the social media platform.

Commenting on the Nice attacks in another tweet, Mahathir Mohamad said, “The killing is not an act that as a Muslim I would approve. But while I believe in the freedom of expression, I do not think it includes insulting other people. You cannot go up to a man and curse him simply because you believe in freedom of speech.” 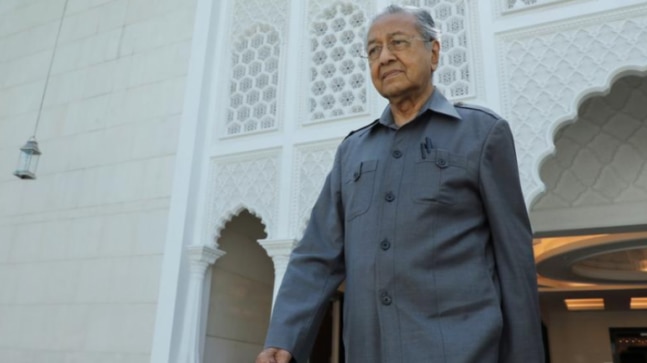 « Armenia PM Nikol Pashinyan’s wife Anna Hakobyan takes military training amid war with Azerbaijan » US Presidential election 2020: ‘Get out to Vote’ a common theme in rallies for both Trump and Biden