People travelling by air can be at lesser risk of catching the coronavirus infection if they take necessary precautions, as compared to doing other activities like grocery shopping or eating out, researchers at the Harvard TH Chan School of Public Health have concluded in a study.

The study titled “Aviation Public Health Initiative” has found that risk of the coronavirus infection during air travel can be mitigated significantly if passengers wash their hands frequently, wear masks at all times, and if airlines clean and sanitize planes thoroughly and ensure there is a constant flow of air throughout the cabin.

The report of the study said that its aim was to understand the dynamics of the presence of the virus inside a commercial aircraft and to recommend strategies to reduce the risk of its transmission onboard.

The report suggested guidelines on the use of masks, screening of passengers, sanitisation and ventilation in the aircraft and awareness regarding the protocols among people. The study concluded that this “layered approach” reduced the transmission of the infection “below that of other routine activities during the pandemic, such as grocery shopping or eating out”.

“Since implementing these measures in the spring of 2020, and with millions of passenger hours flown, there has been little evidence to date of onboard disease transmission,” the study said, stressing that the virus “need not overwhelm society’s capacity to adapt and progress”.

Researchers also identified instances where the virus might have transmitted while flying. In one such example, researchers in South Korea thought a woman may have been infected after she removed her mask while in the lavatory.

The study is being funded by airlines, airports and aircraft manufacturers. However, people related to the study have insisted that the aviation industry’s involvement did not influence the findings.

In an interview, Leonard Marcus, Founding Co-Director of the National Preparedness Leadership Initiative, a collaborative effort of the Harvard School of Public Health and the Kennedy School of Government, said: “There were open conversations back and forth and we were very adamant about maintaining our independence.” 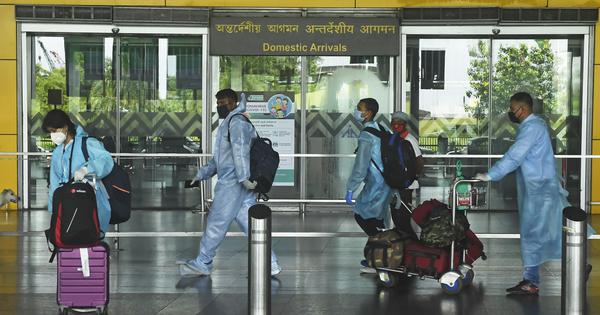