US Presidential election | Campaign heats up in the final week

Mr. Biden’s strategy this week appears to be different: what’s been described by analysts as an effort to ‘expand his electoral map’ — forcing Mr. Trump to defend States such as Florida and Georgia which he had won in 2016. Mr. Biden will travel to Iowa on Friday.

In Georgia , Mr. Biden also campaigned with Democrats Jon Ossoff and Raphael Warnock, fighting competitive Senate races. In Iowa too, Republican incumbent Jonie Ernst and her Democratic challenger Theresa Greenfield are battling it out in the country’s second most expensive senate race as per the Des Moines Register

Speaking in Warm Springs, Georgia, at a retreat of former President F.D. Roosevelt, Mr. Biden brought up the theme of “healing” the nation. “A few weeks ago, I spoke at Gettysburg about the need to unite our nation, and today I’m here at Warm Springs because I want to talk about how we’re going to heal our nation.” he said.

“I’m running as a proud Democrat, but I will govern as an American President. I’ll work with Democrats and Republicans,” Mr. Biden said, repeating one of his core campaign messages. The former Vice-President has also dwelt at length on the need to control the pandemic before rebuilding the economy.

The former Vice-President’s star campaigner, former President Barack Obama, held a drive-in rally in Orlando on Tuesday having already made stops in Pennsylvania last week and in Miami over the weekend. Mr. Biden lost Florida in 2016 and is currently running neck and neck with Mr. Trump, falling behind the President by an average of 0.4 percentage points in recent polls according to Real Clear Politics. “You’ve got the chance to set two things right. You can bring a World Series championship [a baseball tournament] to the Sunshine State and you can send Joe Biden and Kamala Harris to the White House,” Mr. Obama told the audience.

On the campaign trail, Mr. Obama has focused on contrasting Mr. Trump’s character and Mr. Biden’s, saying the former treats the presidency as a reality show. He has also taken to mocking Mr. Trump. “He’s jealous of COVID’s media coverage,” Mr. Obama said. “ If he had been focused on COVID from the beginning, cases wouldn’t be reaching new record highs across the country this week.”

Mr. Obama also talked about his and Mr. Biden’s record on African American unemployment — which had taken a hit in the 2008 financial crisis. He said the only people better off under a Trump administration were those who got tax cuts — cuts, that Mr. Biden would roll back to finance clean energy jobs, Mr. Obama said.

Mr. Obama also said the Trump administration has sought to dismantle the Affordable Care Act, or Obamacare, but has not come up with an alternative for it : a theme Vice-Presidential candidate Kamala Harris also dwelt on while campaigning in Reno, Nevada, on Tuesday.

The former President is expected to join Mr. Biden in a battleground State this week, as per a CNN report. Mr. Biden is expected to be in Michigan on Saturday: Mr. Trump beat Hillary Clinton by 0.3 percentage points in 2016.

Mr. Trump’s messaging has been that the country is “rounding the turn” [turning the corner] on the pandemic — a hypothesis that runs counter to scientists’ expectations based on rising infection numbers and dropping temperatures. He has also linked the pandemic to an economic message — that the election is a choice between a “Trump super recovery” and a “Biden depression”.

Mr. Trump has also included a new segment to his campaign repertoire: playing clips featuring Mr. Biden and other top Democrats. In Erie, Pennsylvania, last week he played a clip with Mr. Biden and Ms Harris’s comments on fracking and fossil fuels. Mr. Trump’s messaging also consists of questioning Mr. Biden’s cognitive state and suggesting that he is a hostage to the “radical left” which will lead the country to anarchy if Mr. Biden is elected. Mr. Trump has also promoted his record of being tough on China and renegotiating trade agreements like NAFTA, which was replaced by the U.S. Mexico Canada Agreement.

At least seven Trump rally attendees were taken to the hospital as temperatures reached near-freezing levels, the Washington Post reported. 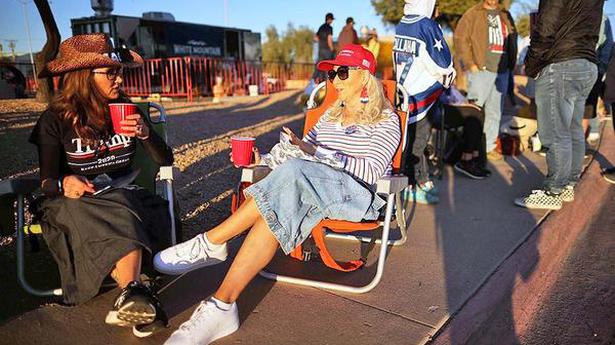