A French teacher, who had shown students cartoons of the Prophet Mohammed, was beheaded outside his school in Conflans Sainte-Honorine, on the outskirts of Paris, on Friday. The attack took place around 5:00 pm (1500 GMT.

Four people, including a minor, were arrested n connection with the “terror attack”, a judicial source told AFP early Saturday. All were related to the assailant, the source said.

A police source was quoted by AFP as saying that the assailant shouted “Allahu Akbar” (“God is greatest” as police confronted him.

Police had arrived at the scene after they receiving a call about a suspicious individual loitering near the school, a police source was quoted by AFP as saying.

They found a dead man and spotted the suspect. He was armed with a blade. Police then opened fire and injured him severely. The man later died of his injuries, AFP quoted a judicial source as saying.

The killing bore the hallmarks of “an Islamist terrorist attack”, Macron was quoted as saying.

Emmanuel Macron further said that “the entire nation” stood ready to defend teachers and that “obscurantism will not win”, AFP reported.

French anti-terror prosecutors said they were treating the assault as “a murder linked to a terrorist organisation”.

France has witnessed a wave of Islamist violence since the 2015 terror attacks on the satirical magazine Charlie Hebdo and a Jewish supermarket in the capital.

According to the report, police said that the victim was a history teacher who recently showed caricature of the Prophet Mohammed as part of a class discussion on freedom of expression.

A parent of a pupil at the school said the teacher might have stirred “controversy” by asking Muslim pupils to leave the room before showing the cartoons, the report further said.

“According to my son, he was super nice, super friendly, super kind,” the parent, Nordine Chaouadi, told AFPTV.

The teacher “simply said to the Muslim children: ‘Leave, I don’t want it to hurt your feelings.’ That’s what my son told me,” the parent was quoted as saying.

According to a judicial source, an identity card found on the assailant indicated he was born in Moscow in 2002, although investigators were waiting for formal identification.

Police said they were investigating a tweet posted from an account that showed a picture of the teacher’s head, and which has since been shut down.

It was unclear whether the message, which contained a threat against Macron — described as “the leader of the infidels” — had been posted by the attacker, they said.

The murder of the French teacher comes as security forces have been on high alert during the ongoing trial of suspected accomplices of the attackers in the January 2015 terror attacks in Paris, which also saw a policewoman gunned down in the street.

It also comes just days after a follower of the Islamic State militant group who attacked a police officer with a hammer outside the Notre-Dame cathedral in Paris was sentenced to 28 years in jail.

Last month, charges were pressed against a 25-year-old Pakistani man after he wounded two people with a meat cleaver to avenge the publication of caricatures of the Prophet Mohammed by Charlie Hebdo, which purportedly prompted the 2015 killings.

Seventeen people were killed in the three-day spree that heralded a wave of Islamist violence in France that has so far claimed more than 250 lives.

(With inputs from AFP 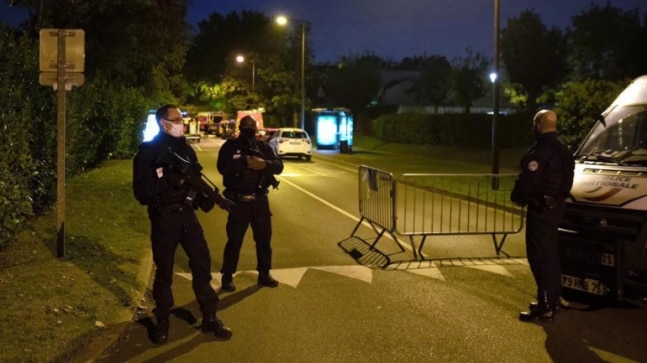 « US to carry out first federal execution of a woman in seven decades » Canada’s Winnipeg closes bars, casinos as coronavirus cases surge