Explainer: Why are Thai students protesting?

The story so far

Thailand’s government, led by the Army chief-turned Prime Minister Prayuth Chan-Ocha, declared a state of emergency on Thursday, banning public gatherings and censoring the media, to tackle the growing students’ protests. The protesters have dismissed the emergency decree as yet another attempt by the government to take away their rights and vowed to continue the agitation, deepening the crisis that has shaken the country’s political and royal establishments.

What triggered the protests?

The roots of the current discontentment go back to the 2014 coup which brought Mr. Prayuth to power. Ever since, the junta tightened its grip on power and introduced more and more restrictions on the public. Many anti-junta activists, who fled the country during the coup and were living in neighbouring nations, went missing. At home, students were ordered to belt out a song every morning extolling Thai values. In 2017, the military introduced a new Constitution, which allowed the military to appoint a 250-member Senate that would play a role in selecting the Prime Minister. It also removed the need for the King to name a regent at home when he travels abroad.

The country held the delayed Parliamentary election last year, which was seen as an exercise to transfer power from the junta to an elected government. But Mr. Prayuth retained power after the disputed election. Public resentment was building up against the military’s outsized influence in the government. In February, the top court’s decision to dissolve the pro-democracy Future Forward Party, which gained the third largest vote share in the Parliamentary election, triggered instant demonstrations. The protests, which subsided in the following months due to the pandemic, sprang back into action in June after the disappearance of a dissident in Cambodia. From July onwards, students have maintained the street pressure on the government, and even started targeting the monarchy.

What is the role of the monarch?

The Thai monarchy has historically been shielded from public criticism by strict lese majeste laws. The monarchy lost absolute authority in the ‘Siamese revolution’ of 1932. But the King retained god-like status in society and enormous influence in the government. The reigning monarch, Maha Vajiralongkorn, assumed the throne in 2016 after the death of his father, the revered King Bhumibol Adulyadej, who at the time of his death was the world’s longest reigning monarch. The junta gave the new King full control of the Crown Property Bureau, which manages the palace’s roughly $30 billion worth of assets. Last year, the King brought two Army units under his direct control. King Vajiralongkorn’s plan appears to be taking the country closer to absolute monarchy. The Generals are on the line. But this has triggered unprecedented resistance from the country’s youth.

What are the students’ demands?

In August, Anon Nampa, a 35-year-old human rights lawyer and one of the leaders of the protesters, called for reforms to the monarchy. Students then submitted 10 demands to the government, asking for a separation of the King’s assets and the Crown Property Bureau. They also wanted to cut the Palace’s share in the national budget, a ban on the King from expressing his political views, and safeguards to prevent him from endorsing future coups. This was an unprecedented step given that criticism of the monarchy could be punished by prison terms up to 15 years in Thailand. The students have also called for the Prime Minister’s resignation; a new Constitution; fresh, free and fair elections; and an end to attacks on dissidents and Opposition parties such as the Future Forward Party.

How the protesters are using pop culture?

Unlike the past protests in which two political sides clashed with each other, the current movement is largely led by school and college students. They used young adult pop culture icons and symbols from the Harry Potter and The Hunger Games books and films for mobilising more young protesters against the government and the monarchy. In July, when the protests were still in the initial stages, hundreds of students sang a Japanese cartoon jingle in a rally, mocking the government as hungry hamsters feasting on taxpayers’ money. In August, thousands hit the street dressed in Harry Potter-style wizard costumes, holding up chopstick-wands. Instead of slogans, they cast mock spells against the “Death Eaters” of the establishment. They wanted both “the muggles and the wizards” to come together against the dark powers. The three-finger salute, a symbol of resistance and solidarity of the movement against the dystopian dictatorship of President Snow in The Hunger Games trilogy, was borrowed by the Thai protesters. On October 14, they raised the three-finger salute to a royal motorcade that was carrying Queen Suthida. A day after, the emergency decree was issued.

What does the government say?

The government says it won’t use force against the peaceful protesters, but has also warned them against “insulting” the monarchy. The authorities have not shown any readiness to accommodate the demands of the protesters. Now, the emergency gives the government more powers to tackle dissent and protests, and the police have already arrested some protest leaders. With the students refusing to stand down, Thailand could be descending to another showdown. 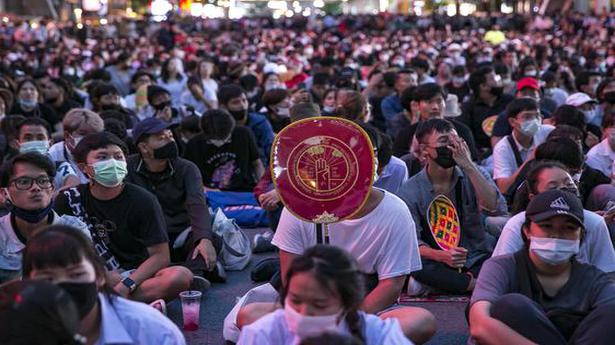