Bangladesh approves death penalty for rapists. But will this change its culture of impunity?

In face of massive protests across the country, Bangladesh’s government on Monday approved an amendment that would allow for the death penalty in rape cases.

Khandker Anwarul Islam, secretary of the cabinet division told the reporters after the weekly cabinet meeting that the draft of the Women and Children Repression Prevention (Amendment) Bill had been approved and a provision for the death penalty was incorporated.

“Prime Minister Sheikh Hasina has given an emphasis on completing trials of rape cases within the stipulated timeframe as well,” said Islam.

For the past week, thousands of people have been staging rallies and protests in Dhaka and elsewhere to demand what they called “just” and “stricter” punishment for the rapists.

Those protests were erupted after video emerged showing several men stripping and attacking a woman from a disadvantaged community in the southern district of Noakhali early in September.

A gangrape in Sylhet

Even before the video footage emerged, anger had been brewing since several members of the ruling party’s student wing were arrested last week and charged with gangraping a woman in northern Sylhet.

The protest against rape first started on social media with users blackening their profile photos en masse. Social media platforms were used to organise human chains, protest rallies and demonstrations across the country.

“I am protesting as I feel the successive governments have shown their apathy in bringing rapists to the book. The justice in rape cases is not ensured at all,” said Marjia Sultana, a university student who was protesting in Dhaka’s Shahbagh area.

She however expressed her scepticism about the government’s decision of introducing death penalty for the rapists. “I think they [government] just did it to appease the protests,” she said. “The real problems are not addressed by such decision.”

Only 3% of cases relating to violence against women and children result in a conviction in Bangladesh, according to a 2019 report by the Women and Children Repression Prevention tribunal from five districts.

According to rights body Ain O Salish Kendra, 975 cases of rape have been reported so far this year, with 208 of them being gang rapes.

ASK data says that a total of 632 rape incidents took place between April and August. This means that four women have been raped every day during the last five months of the coronavirus pandemic.

Taqbir Huda, a research specialist at Bangladesh Legal Aid and Services Trust said that since Bangladesh’s independence in 1971, the law has been reformed three times by three different governments as part of an effort to introduce legislation on violence against women.

The punishment for rape depends on the type of rape which has been committed, as per section 9 of the Suppression of Violence Against Women and Children Act 2000, said Huda.

On the other hand, the punishment for attempt to rape under section 9(4) could be anything between five to ten years imprisonment, said Huda.

“Now the government has just changed section 9(1) and introduced death penalty as the highest punishment instead of life imprisonment,” said Huda.

The researcher said that since the recent protests erupted from the Noakhali gang rape case, the death penalty was already a possible punishment for the accused rapists in existing law even before the amendment)

The absence of death penalty for single perpetrator rape (without murder) under the 2000 Act has not been an obstruction to justice at all, he added.

According to Huda, the low conviction rate has two main reasons.

“Firstly, research has shown that the severity of punishment tends to share an inverse relationship with the rate of conviction in criminal cases,” he said. “So, the more severe the punishment, the lower the rate of conviction is likely to be. This is particularly relevant for rape cases in Bangladesh, since the punishment for single perpetrator rape can only be life imprisonment, which robs judges of their sentencing discretion, which is an essential component in any justice system.”

He explained: “It must be noted that the lowest punishment for rape in Bangladesh is life imprisonment, which is usually the highest punishment in countries for any offence, even murder, in most advanced legal systems.”

Secondly, Huda said, survivors who file rape cases tend to face violent reprisals from the accused, who are usually more powerful and influential, for daring to seek justice.

“The lack of witness protection system allows the rapist’s side to threaten the rape survivor to the point they are no longer able to continue the case out of fear for their own safety,” he said. “Therefore in those cases, there is likely to be an out of court settlement, and the rapist gets acquitted.”

The definition of rape under current Bangladeshi law (Penal Code 1860/375) has little clarify the idea of consent, which is the primary determinant of what constitutes rape, said Dhaka-based human right activist Zefroon Afsary. This results in ambiguity that can tolerate unacceptable degrees of sexual violence.

“This law is inherited from another era which also tolerated racism and slavery,” said Afsary. “Naturally it cannot fit the criteria that can successfully tackle the level of sexual assault that is faced by women and girls who are living 160 years later. Present-day women experience sexual abuse in many fronts, sometimes repeatedly; in public transport, streets, homes, educational institutions and the workplace-making all spaces unsafe.”

She said in most cases the women are discouraged to ask for justice, due to stigma around the topic of sexual violence, general lack of respect for women and high levels of apathy to the violation of women’s bodies.

“This is encouraged by a thriving culture of impunity against perpetrators,” Afsary said. “The law needs revision to include intimate partner violence, which is an unrecognised reality of an overwhelming number of women and girls.”

Bangladeshis must first be ready to view violence against women and girls as crimes and not instances that lower her “honor” in society, she said

“In villages of Bangladesh, it is the norm to marry off the survivor to rapist, showing to what extent the association of ‘violation of female body’ with ‘shame’ can cause,” Afsary said. “Sex education should be part of schooling and the practice of zero tolerance for violence and abuse should be adopted by all workplaces.”

She added: “Women’s safety must be ensured in public spaces firstly by acknowledging them as a human being with dignity and rights, instead of subjecting her to objectification, stereotyping and toxic social norms that don’t hold men accountable but comfortably restricts the freedom of women and girls.”

Faisal Mahmud is a Dhaka-based journalist 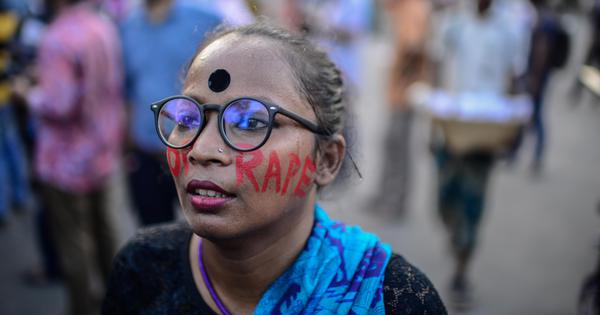 « Donald Trump says he feels ‘powerful’ and wants to give ‘big fat kiss’ to everyone as he returns to election campaign » US presidential election 2020: More than 10 million early votes registered, says study