In one month, Trump and Biden spent $27 million on social media ads

The campaigns of Donald Trump and Joe Biden together spent $65.8 million on social media advertising between June 1 and September 13, according to Syracuse University’s Illuminating 2020 project. The project, which I am part of, tracks the spending and the targets of Facebook and Instagram ad buys, based on data provided by the platforms.

About 40% of that spending came between August 10 and September 13, when the campaigns spent a combined $27 million online. Overall, this is roughly the same spending rate as Trump and Hillary Clinton had during the same time period in 2016.

With these ads, which amount to about 30% of both campaigns’ spending, the candidates are trying to mobilise voters – find supporters and then spark them to get involved.

About 70% of the campaigns’ spending is aimed at persuading voters – changing hearts and minds or solidifying support among the base. Over the same August 10 to September 4 period, Biden and Trump spent a combined $60 million on television ads, according to the Wesleyan Media Project.

It is much more expensive to run an ad on TV versus online. A prime-time broadcast television ad costs about $100,000 for 30 seconds, generally reaching hundreds of thousands of households, while a social media ad costs a few hundred dollars to reach tens of thousands of individual users. Those are estimates – many factors affect the actual cost of both types of ads, including location, timing and target demographics, but digital ads are far cheaper than TV.

Print, radio and billboard ads are a tiny share – usually less than 5% of presidential advertising spending.

Nearly all of Trump’s and Biden’s campaigns’ online advertising involves some sort of call to action, urging the ad’s viewers to do something – such as give money, sign a petition, answer a poll, sign up to get emails or watch the latest video ad. Those ads also help the campaigns gain additional data about supporters, like what issues they are interested in and how they are involved in their community. The campaigns use that information to develop and run ads in key states and identify potential supporters who can become local evangelists for the campaign.

Between June 1 and September 13, Trump spent $34.5 million, 86% of his total online spending during that period, on calls to action. In that same period, Biden’s calls to action cost $23.4 million, or 89% of his online ad spending.

The candidates targeted much of their spending – about one-third of Trump’s and more than half of Biden’s – in a few key states.

These are not necessarily battleground states but instead places where the candidates have strong bases of support. These supporters are potential campaign volunteers and sources of money for more ads.

Campaigns target their Facebook ads based on party affiliation, gender and age. Trump’s campaign targets men and women at roughly the same rate, but Biden’s campaign targets women at roughly 3 to 2 – for every $2 they spend on men, they spend $3 on women. Biden’s spending reflects the Democratic Party’s gender dynamics. Women are more likely to identify as Democrat than Republican.

Trump’s campaign ad spending skews older than Biden’s. Trump spends the largest share of his Facebook ad dollars on people who are 55 or older. Biden’s campaign spends the most money on the age 35-44 demographic. Both campaigns spent less targeting people between 18 and 24, probably because young people are less likely to turn out to vote than their elders.

As the last month of the campaign begins, the candidates will make their final ad purchases. Expect to see online ads continue to run in the states where each campaign has been focusing, calling on supporters to give, act, tell friends and show their support as Election Day nears.

Jennifer Stromer-Galley is a Professor of Information Studies at Syracuse University. 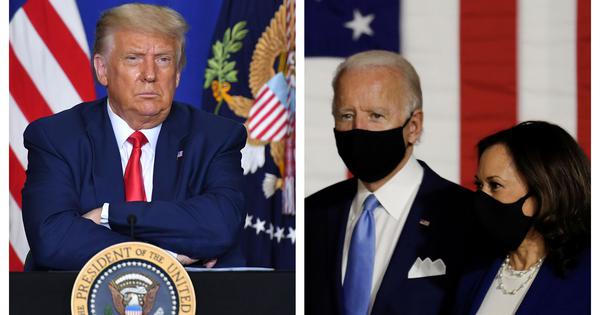