But Trump’s COVID-19 infection, and his and Biden’s advanced age, make it perhaps the most consequential U.S. vice presidential debate in living memory.

Here are a few standout moments from the debate:

COLORING INSIDE THE LINES

Following last week’s chaotic, insult-laden debate between Biden and Trump, moderator Susan Page warned both candidates that she would strictly enforce rules designed to ensure decorum. “We want a debate that is lively. But Americans also deserve a discussion that is civil,” she said.

Both candidates were on their best behavior at the outset and wrapped up their statements when warned by Page that their time had expired.

Pence opened by saying it was a “privilege” to be on stage with Harris – even after she said the administration’s coronavirus response was “the greatest failure of any presidential administration in the history of our country.”

Things heated up later, but only to a simmer, not a boil.

“Mr. Vice President, I’m speaking,” Harris said when Pence interrupted her during a discussion on taxes. Pence let her finish.

In 2008, when he was Barack Obama’s running mate, Biden said that “no one decides who they’re going to vote for based on the vice president.” Yet this debate has outsized importance.

Biden, 77, would be the oldest president in U.S. history if he were to win the election, and he has hinted he might only serve one term.

Trump, only slightly younger at 74, spent the weekend at a military hospital outside Washington after contracting the novel coronavirus.

From purely an actuarial standpoint, Pence, 61, and Harris, 55, would be more likely to step into the presidency than other vice presidential candidates.

Pence also carries an additional burden as he has been tasked with campaigning for the ticket as Trump has been sidelined because of his COVID-19 infection.

Yet both candidates avoided the topic.

When asked whether they had a firm plan of succession in place, Pence used his time to talk about vaccines, while Harris talked up her biography as a child of immigrants who went on to serve as California attorney general.

Likewise, neither answered directly when asked why their elderly running mates had not released detailed health information. Pence thanked those who had wished for Trump’s recovery, while Harris criticized Trump for not releasing his tax returns.

Candidates typically show up with a quiver of prepared one-liners, and Pence loosed one early.

He accused Biden of copying the Trump administration’s plan to fight the coronavirus, dredging up charges of plagiarism that helped sink Biden’s first presidential run in 1988.

Eager for every advantage, campaigns often battle over everything from the format of the debate to the height of the podiums.

This time around, they have been at odds over coronavirus protections. The Salt Lake City debate stage features a Plexiglas barrier between the two candidates, which was installed over the objections of Pence’s aides. They also are sitting more than 12 feet (3.6 m apart on stage.

Debate organizers handed out salmon-colored masks to all debate attendees and cordoned off alternative rows in the theater where the debate will be held to promote social distancing.

It was a potent reminder that opinion polls show the coronavirus is the most important issue for voters, outstripping traditional concerns like the economy and national security. Pence has headed the Trump administration’s coronavirus task force as the pandemic has killed more than 210,000 Americans and shut down wide swaths of the economy.

Members of Trump’s entourage refused to wear masks at last week’s debate in Cleveland, just two days before he and his wife, Melania, tested positive. The Commission on Presidential Debates has said anyone who does not wear a mask will be escorted out. 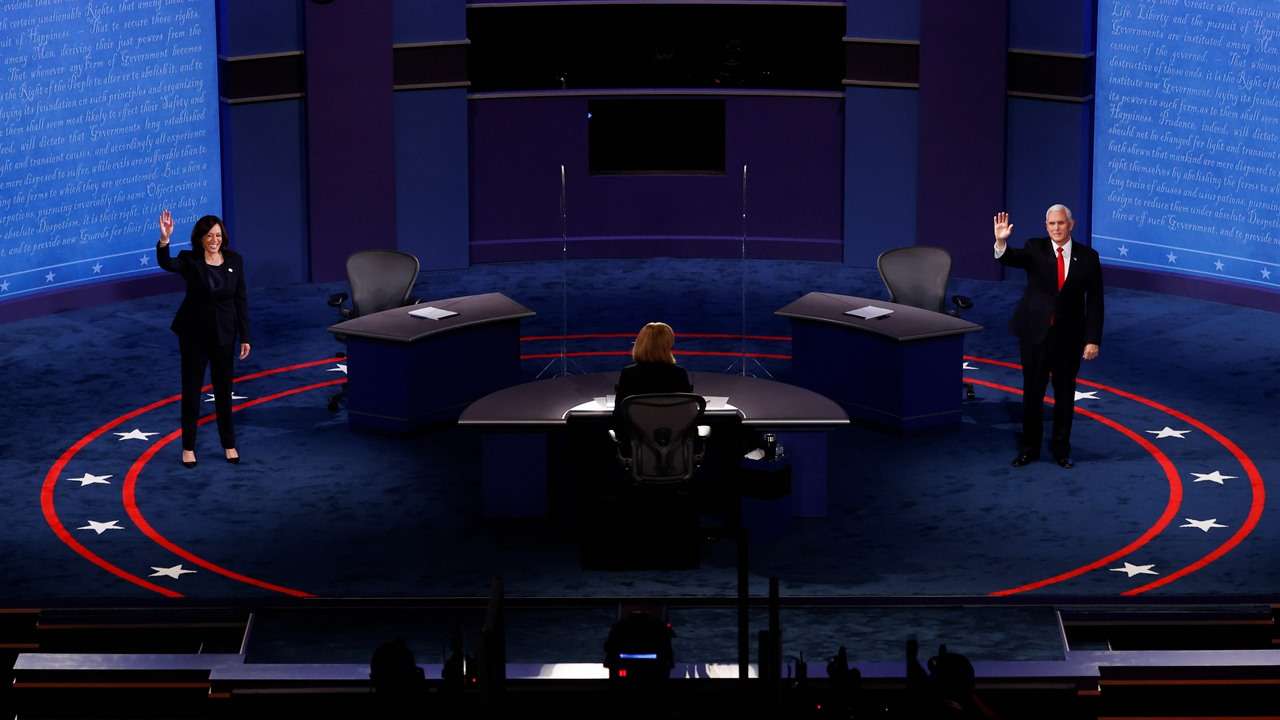