Against the backdrop of a raging pandemic that has claimed more than 210,000 lives across the country, Vice-President Mike Pence and Democratic vice-presidential pick Kamala Harris faced off in the only VP debate of the season in Salt Lake City, Utah. With acrylic sheet barriers beside their desks — a reminder of the public health crisis the nation faces — the candidates sparred on the Trump administration’s pandemic response, the economy, climate, China and Ms. Harris’s prosecutorial record.

Ms. Harris described the Trump administration’s handling of the pandemic as “the greatest failure” of any administration in U.S. history and said — citing investigative journalist Bob Woodward — that the President knew about the viral threat at the end of January (weeks before a public emergency was declared. She said the administration still did not have a plan to tackle the pandemic.

“And frankly, this administration has forfeited their right to re-election based on this,” Ms. Harris said.

The debate was noticeably civil and involved some substantive policy discussions unlike the presidential debate last week between President Donald Trump and his challenger, Democratic nominee Joe Biden. Also noticeable — and discussed on social media and in the press — was a fly that landed Mr. Pence’s head during the debate.

Mr. Pence said Mr. Biden, if elected President, was going to raise taxes and that he was going to ban fracking, promng Ms. Harris to declare — twice — that Mr. Biden would not raise taxes for those making less than $400,000 a year and would not ban fracking. Mr. Pence said Mr. Biden was a “cheerleader for Communist China”. Ms. Harris said the Trump administration had lost its trade war with China and that had an impact on the U.S. economy and jobs.

Candidates avoided answering questions — Ms. Harris repeatedly did not answer a question on whether or not her party would “pack the court” (increase the number of Supreme Court justices from nine if Republicans confirmed judge Amy Coney Barret to the court. There were instances of Mr. Pence providing information on one subject when he was asked about another.

The Vice President refused to answer whether climate change was an existential crisis.

“The climate is changing, we’ll follow the science,” he said. The Trump administration has often questioned the role of science as a basis of policy making. In September, at a meeting with state officials in California to discuss the wildfires ravaging the West Coast, Mr. Trump had said, “I don’t think the science knows.”

Ms. Harris defended a hypothetical Biden-Harris administration’s decision to join the Paris climate accord and said they would do so “with pride”.

Mr. Pence also did not elaborate on how the pre-existing health conditions would be covered in any alternative plan to the Obama-era Affordable Care Act (Obamacare, which the Trump administration is litigating in the Supreme Court.

When asked a question on what he would do if Mr. Trump refused to accept the election results, Mr. Pence did not provide a straight answer, instead saying that the Republicans were going to win the election.

“When you talk about acceng the outcome of the election, I must tell you, Senator, your party has spent the last three and a half years trying to overturn the results of the last election,” Mr. Pence said, referring, among other things, to the impeachment of Mr. Trump by the Democrat-controlled House of Representatives.

Responding to a similar question on the Biden-Harris strategy if Mr. Trump refused to accept the results, Ms. Harris said: “Please vote. Vote early, come up with a plan to vote.” 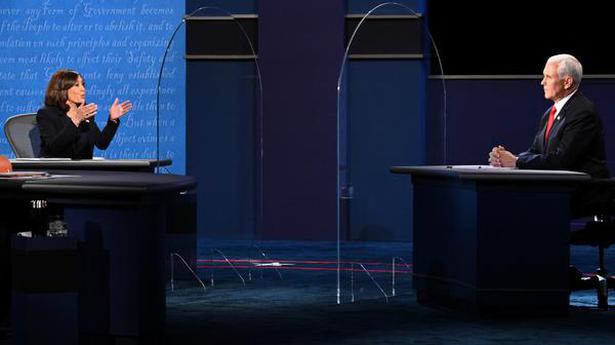