A Hawaii-based attorney predicted the possible coronavirus test results of United States President Donald Trump at least 30 minutes before the official announcement. Timothy Hogan took a cue from the unusually visible airborne nuclear command center soon after Donald Trump said that he has taken a test for the novel coronavirus and was waiting for the results.

By this moment, the results of Donald Trump’s coronavirus test had not been announced. Hogan observed two airborne nuclear command centers flying off east and west coasts and predicted that these unprecedented deployments could be part of the emergency protocol in case the commander-in-chief of the US Armed Forces is under any kind of direct threat.

RT There’s an E-6B Mercury off the east coast near DC. I looked because I would expect them to pop up if he tests positive. It’s a message to the small group of adversaries with SLBMs and ICBMs. pic.twitter.com/3ta9PmPxZD

“Tonight, @FLOTUS and I tested positive for COVID-19. We will begin our quarantine and recovery process immediately. We will get through this TOGETHER!” President Donald Trump tweeted.

This is fascinating: the man who predicted the positive test because of the defensive manoeuvre by the US military. https://t.co/KRQvk68lT7

The E-6B Mercury acts as an airborne one-stop command and control center to operate the land and sea-based remote nuclear-armed ballistic missiles of the US government which continues to function even in the worst-case scenario.

The fact that its active airborne status was made visible on public air traffic systems meant that it could have been done under a strategic protocol to send the message to potential adversaries in the time of a potential leadership crisis in the US government.

The nuke planes are now flying on both coasts. Tim called the positive test announcement once he saw these up. What a warning to send.

Operated by the US Strategic Command (USSTRATCOM, E-6B is a dual-mission aircraft which is meant to execute “Take Charge And Move Out” (TACAMO protocol, which can take commands from the US National Command Authority (NCA to direct the nuclear-capable underwater submarines and intercontinental ballistic missiles (ICBMs.

The E-6B also has an airborne launch control system (ALCS, which is capable of launching US land-based intercontinental ballistic missiles. Its communication systems have a Very Low Frequency (VLF system, which is capable of penetrating deep into the ocean’s water in order to connect with submarines.

A 22-member highly trained aircrew known as the “Ironmen” and the “Shadows” operate from Tinker Air Force Base, Okla to run this mission.

The earlier version of the E-6B fleet was modified into the modern E-6B post 9/11 in 2003. Manufactured by Boeing, one unit of the fleet costs $141.7 million. US President Donald Trump had earlier announced that he and the first lady have tested positive for the coronavirus after one of his top aides’ result came as positive. 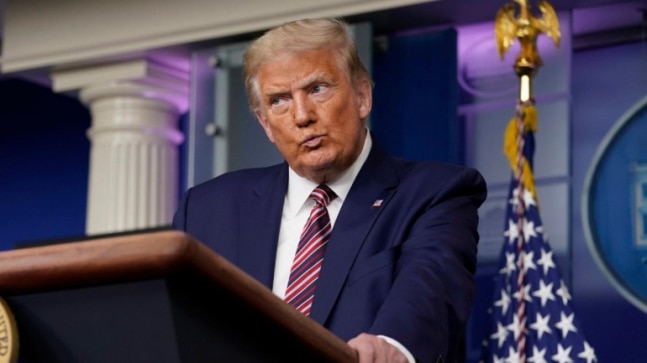