Tenetehara Indigenous men prepare to go out on their boat in the Gurupi River, in the Alto Rio Guama Indigenous Territory, where they have enforced six months of isolation during the COVID-19 pandemic, near the city of Paragominas, state of Para, northern region of Brazil, Monday, Sept. 7, 2020. The Indigenous group, also known as Tembe, held a festival this week to celebrate and give thanks that none of their members have fallen ill with COVID-19, after closing their area off in March. (AP Photo/Eraldo Peres)

A group of Tembe men armed with bows and shotguns arrived on motorcycles at the wooden gate blocking access to their villages in Brazil’s Amazon. One of them removed the padlock and slipped the chain off the gate.

“You are invited,” 33-year-old Regis Tufo Moreira Tembe said to a visitor. “What we are doing is for everyone, and for our good.”

The gate has seldom swung open since March, which helps to explain why the Tembe have gone six months without a single confirmed coronavirus infection. To celebrate that milestone, they were preparing a festival and invited an Associated Press photographer to observe.

The Tembe are the western branch of the Tenetehara ethnicity, located in the Alto Rio Guama Indigenous territory on the western edge of Para state. The virus has infiltrated the lands of dozens of Indigenous groups after they came to nearby cities to trade, buy staples and collect emergency welfare payments from the government. 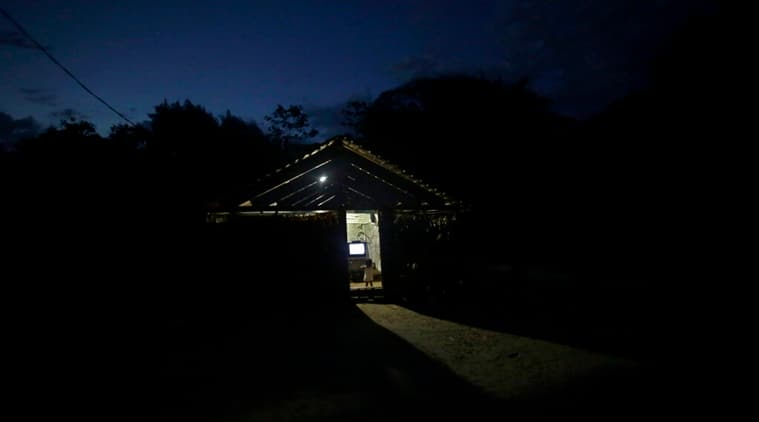 A Tenetehara Indigenous child, framed by a doorway, watches television in her home in the Alto Rio Guama Indigenous Territory, where they have enforced six months of isolation during the COVID-19 pandemic, near the city of Paragominas, state of Para, northern region of Brazil, Monday, Sept. 7, 2020. (AP Photo/Eraldo Peres)

The hundreds of Tembe people of the Cajueiro, Tekohaw and Caninde villages locked their gate and allowed people out only in case of emergency, while restricting entry to agents from the federal Indigenous health care provider, SESAI.

Now, after the number of daily COVID-19 cases and deaths in Para has finally plunged, the Tembe have begun believing they will emerge from the pandemic unscathed.

“We didn’t go to the city, we didn’t go to other villages. We remained in quarantine. We got through, we are still getting through,” said Sergio Muxi Tembe, the leader of the Tekohow village.

Late afternoon on Sept 9, the women of Tekohow gathered inside the communal kitchen to prepare a feast with giant pots of manioc and rice, plus roasted tucunare fish wrapped in banana leaves.

At the very start of the epidemic, women from the three villages formed councils and visited residents at their board-and-batten homes to educate them about the peril of COVID-19 and how it is transmitted.

“We decided to create the group to give more orientation to the families because, even with the speech from the health technicians, people continued leaving,” Sandra Tembe, a 48-year-old teacher of the native language, said in an interview.

“At the start, it was very difficult for us because there were families who we arrived to orient who didn’t want to agree, and said, ‘Why are you saying that? Why stay in isolation?’ That moment was very critical.”

She is thankful they listened, and that her people haven’t suffered like other ethnicities. The tally from Indigenous organization APIB, which includes health ministry figures and information from local leaders, shows there have been 31,306 confirmed coronavirus infections and 793 deaths among Indigenous people.

It has infected members from 158 ethnicities, 60 per cent of those found in Brazil, according to the Socio-Environmental Institute, an Indigenous advocacy group