If India wants to hold moral high ground along the LAC, it must be a reliable partner to Tibet

The recent deployment of the Tibetan Special Frontier Force along the Line of Actual Control to counter manoeuvres from the Chinese People’s Liberation Army has resulted in renewed attention about the Free Tibet movement.

This unit gained attention last week with the announcement of the death of Special Frontier Force member Nyima Tenzin as he stepped on a landmine while patrolling the Line of Actual Control. On social media platforms and in the opinion columns of publications, there was a sudden resurgence of consciousness for the aspirations of the Tibetan community and a surge of concern for their place in India.

This expression of solidarity was accentuated on Monday with the broadcast of images of Tenzin’s funeral, depicting his coffin draped in the Indian and Tibetan flags.

Yet for all this display of sentiment, India’s ambivalence towards the Tibetan cause has greatly weakened its credibility on the issue. This belated reawakening seems rather superficial.

After Tibet’s annexation by China in 1950, a series of aggressive policies executed led to the Dalai Lama – the community’s spiritual and temporal leader – taking refuge in India in 1959. Ever since, ore than one lakh Tibetans have come to call India their home. While the Cultural Revolution in 1960s China attempted to eradicate Tibetan identity, India not only became a physical refuge for its people, but a sanctuary for its rich cultural and religious traditions.

India allowed the Tibetan community to find a place in Indian society while helping it in maintaining its distinct identity. The support provided to Tibetan schools, libraries, cultural institutions and monasteries are an example of this.

On the political front, however, India’s attitudes have swung between the occasionally lukewarm the the outright apathetic. The fact is that India has never considered the autonomy of Tibet as a significant objective. Its proximity to the Dalai Lama, and to the Central Tibetan Administration (the Tibetan Government in Exile) based out of Dharamshala is determined exclusively by the state of New Delhi’s relations with China.

The most recent demonstration of this was in 2018. At a time when India was trying its best at mending frayed relations with China, the 60th anniversary celebrations of the arrival of the Dalai Lama in India were rather coldly shifted from Delhi to Dharamshala. An internal memo circulated within the government prohibited senior functionaries and ministers from attending any of the events.

Although realpolitik does have its time and place, it is imperative to give permanent recognition to the Tibetan community and its aspirations. While one can debate about the legitimacy of Tibet as a separate state (a highly convoluted historical question), what cannot be questioned is the existence of a national identity that most certainly merits a degree of autonomy.

India’s support for this notion is integral at a time when China is not only flexing its ambitions across the border but also redoubling its efforts in Tibet. During the 7th Central Symposium on Tibet held on August 29 – the highest working body for Tibet – Chinese President Xi Jinping called for “sinicising” Tibetan Buddhism and the building of a “new modern socialist” Tibet. He also stated that Tibet must eventually be developed into an “impregnable fortress” of stability.

Keeping in mind the recent events along the LAC and the timing of this symposium, such a policy outline for Tibet must not be seen independently. China’s renewed attempt in crushing any form of Tibetan dissent is complementary to its advances along the Indo-Tibetan border.

Combined, these thrusts aim to validate Chinese rule in Tibet and further encroach upon Indian territory. Both efforts have very little legitimacy. China’s control over Tibet is not only highly questionable, but the vast number of cultural, socio-political, and humanitarian atrocities it has carried out has also made it constitutionally immoral.

To counter China, India must not only strengthen its own borders but also reinvigorate its support for the Dalai Lama and the Central Tibetan Administration.

Indo-Tibetan relations date back nearly 2,000 years. Deeper ties can be found in religious texts such as the Mahabharata, which mentions the existence of a realm beyond the Himalayas. Buddhism in Tibet originated from India, and places such as the Kailash Parbat and Manasarovar have a mutual place in the national imaginings of India and Tibet.

The 60-odd years of Chinese imposition pales in comparison to the shared Indo-Tibetan traditions that have lasted through millennia. This relationship only furthers India’s prerogative to aid the Tibetan people in reclaiming their homeland.

India must adopt a two-pronged approach, one that involves strengthening its borders for tactical superiority while furthering the aspirations of the Tibetan people – those that are represented by the Dalai Lama and the democratically elected Central Tibetan Administration.

What exactly this might entail will have to depend on what is conceivable in the present strategic situation, but this position has to be for the long haul. If India wants to hold moral high ground along the LAC, it must aim to be a reliable partner to the people of Tibet. And do so not out of geo-political convenience, but because it is the right thing to do.

Currently at SOAS, Ranvijay Singh is a keen, albeit amateur, aficionado of military and South Asian history as well as mountaineering literature. His Twitter handle is @ranvijayhada. 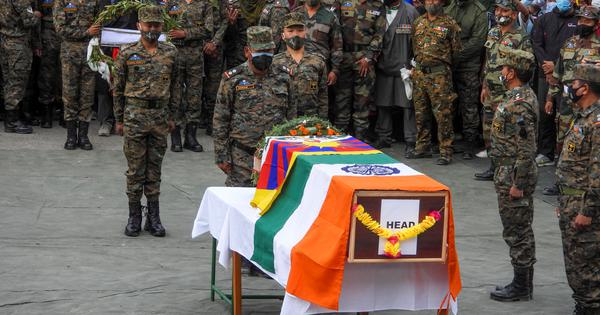