Tens of thousands of demonstrators marched Sunday to the outskirts of the presidential residence in the capital of Belarus, calling for the country’s authoritarian leader to resign as protests against President Alexander Lukashenko entered their fifth week.

The protests, unprecedented in Belarus for their size and duration, began after the August 9 presidential vote that election officials said gave Lukashenko a sixth term in office with 80 per cent support. Protesters say the results were rigged, and some have explained to Associated Press journalists exactly how the fraud took place in their districts.

Lukashenko has ruled the country with an iron fist since 1994, regularly repressing dissent and press freedom.

Police violently cracked down on demonstrators in the first days of the protests, arresting some 7,000 people and beating hundreds. Although they have scaled back, detentions continue; Viasna reported scores of people were arrested in Minsk and in the city of Grodno on Sunday.

Police and army troops blocked off the center of Minsk on Sunday, but demonstrators marched to the outskirts of the Palace of Independence, the president’s working residence 3 kilometers (2 miles outside the city center. The palace grounds were blocked off by phalanxes of shield-bearing riot police and water cannon.

“This sea of people cannot be stopped by military equipment, water cannons, propaganda and arrests. Most Belarusians want a peaceful change of power and we will not get tired of demanding this,” said Maria Kolesnikova, a leader of the Coordination Council set up by the opposition to try to arrange a dialogue with the 66-year-old Lukashenko about a transition of power.

She spoke with The Associated Press by telephone.

Lukashenko has rejected any discussion with the council and some of its top members have been jailed. One of them, Olga Kovalova, was expelled from the country over the weekend, driven to Poland by police.

Despite the stalemate between Lukashenko and the opposition, protesters say they are determined not to tire. Some of the placards they carried Sunday showed a lively sense of humor.

“Lukashenka, start building a house near Yanukovych,” read one, referring to former Ukrainian President Viktor Yanukovych who fled to Russia in 2014 after months of anti-government protests.

“The collective farm went bankrupt,” said another, evoking Lukashenko’s former position as a collective farm director and his retention of largely state-controlled Soviet-style economy for Belarus, an Eastern European nation of 9.5 million. 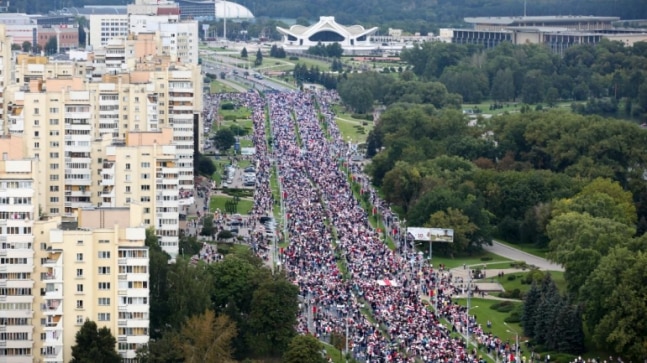