The European Union has agreed to impose sanctions on up to 20 senior Belarus officials suspected of election fraud and the crackdown on protesters and is likely to put President Alexander Lukashenko on its list at some point, the bloc’s foreign ministers said Friday at a meeting in Berlin.

In Vienna, the Organization for Security and Cooperation in Europe offered to mediate between the two sides in Belarus, with chairman Edi Rama pledging not to “interfere in internal affairs,” but at the same time stressing human rights abuses must end.

Belarus’ authoritarian president of 26 years has faced weeks of protests since he was re-elected to a sixth term on Aug. 9 with 80% of the vote. The opposition says the poll was rigged and the EU, among others, disputes the results.

In the first four days of demonstrations that followed, Belarus security forces detained almost 7,000 people and injured hundreds with rubber bullets, stun grenades and clubs. At least three protesters died. Around 180 people were detained at rallies on Thursday.

“We have general agreement on how the list will be structured and who will be, more or less, on the list,” the Czech Republic Foreign Minister Tomas Petricek told reporters. However, the technicalities involved in legally finalizing the list won’t be concluded for at least another week.

Asked whether the Belarus president will be hit by a travel ban and asset freeze, Petricek said he believes that “Lukashenko should be on the list. The question is whether in the first stage or a later stage if there is no progress.”

Lithuanian Foreign Minister Linas Linkevicius agreed that Lukashenko should be on the list now, but he acknowledged that there may be “tactical reasons” to keep the Belarus leader off. Lithuania had tabled its own list of 118 officials.

Some countries prefer a gradual approach that would ratchet up the pressure by adding more names progressively if Lukashenko failed to enter into talks with the opposition.

Greece and Cyprus are also believed to be demanding that sanctions be slapped on Turkey for what they say is its illegal energy exploration in the eastern Mediterranean before the two countries agree to the measures against Belarus.

Russian President Vladimir Putin warned Thursday that he stands ready to send police to Belarus if protests there turn violent, but sees no such need yet. Linkevicius said that “we cannot exclude this invasion,” and that the EU must also send a clear warning to Russia.

German Chancellor Angela Merkel told she stressed the importance of Belarus’ sovereignty in a recent call with Putin.

“I hope that such a unit won’t be deployed,” she told reporters in Berlin.

Merkel said she has also tried to call Lukashenko, but that he has refused to speak with her thus far.

The EU has supported proposals from the OSCE to promote dialogue in Belarus, one of the organization’s 57 member nations, and has said it stands ready to provide assistance to further them.

In a special meeting on the situation in Belarus in Vienna on Friday, Rama, who is the prime minister of Albania, laid out the case for the organization to assist in facilitating talks between Lukashenko and the opposition.

“For the country to move forward safely and as securely as possible will require mutual understanding and cooperation inside Belarus,” Rama said. “And our role should be to help bring that about.”

He emphasized that “if we are to play a constructive role it is not for us to take sides” and that the OSCE could provide “dispassionate third party counselling.”

But at the same time, he noted the restrictions on journalists, and the injury and loss of life to protesters in the government crackdown, saying that “the picture is ugly, to say the least.”

“Belarus is here, with us, as a friend, but friends must remind each other of important truths, and the authorities in Minsk need to hear this one,” he said.

“The OSCE is founded on principals that include full respect for democracy and human rights… There cannot be any ifs or any buts about this. These are principles and they must be upheld.” 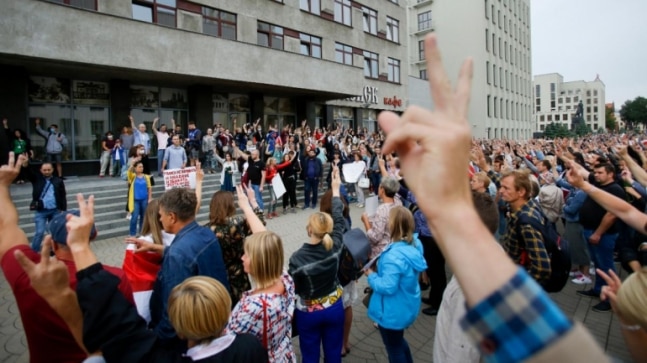 « Hyderabad based Biological E ties up with US college for vaccine production » RNC 2020 convention takeaways: What virus? Fear motivates